Free tools, teachings and tips on growing your mental strength.

The Emperor’s New Clothes: A Story About Embracing Authenticity and Courage

There’s a story about this you might remember from your childhood. Hans Christian Anderson’s ‘The Emperor’s New Clothes’ is a fairy tale about two con men who pretended to be weavers and convinced the Emperor they had a magical fabric with which they could make him the finest suit in all the land.

The Magical Fabric Woven with a Dark Secret

The magic of the fabric, said the con men, is that it can only be seen by those who are intelligent and brave. It appears invisible to those who are stupid and incompetent.

The Emperor, who loves fine clothing is excited about this magical suit, and he pays the men a handsome sum to get a suit ready for an upcoming parade. After a week the Emperor sends men to check on the weavers work. When each man realizes he sees nothing, they do not want to admit this as they don’t want to appear stupid and incompetent. So, each man lies to the Emperor, saying how wonderful the suit is looking.

The suit is brought to the Emperor on the day of the parade. The Emperor sees nothing, but he too, did not want to be seen to be stupid or incompetent, so he agrees that the suit is wonderful and goes to put it on.

The Emperor then goes on his royal parade through town in front of his entire kingdom with no clothes on. Everyone in the kingdom sees the emperor without clothes, but for fear of being accused of being stupid or incompetent, they all speak to each other about how magnificent he looks.

Finally, a child yells out, ”The Emperor isn’t wearing any clothes!” Then everyone realizes what is actually true and starts giggling. Then everyone starts exclaiming together, “The Emperor has no clothes on!” The Emperor then found himself standing in the middle of the parade wearing nothing but his pride.

We can all probably relate to this story because we all share a common challenge.

We humans are tribal creatures. The way our minds have evolved means we will always feel a strong pull to fit in and be part of the pack. We feel drawn to conform in rather than risk rejection. Getting kicked out of the tribe in the caveman days of our ancestors meant certain death so fitting in can sometimes feel like a matter of survival.

But this internal pressure to conform means we can sometimes deny our own feelings instead of listening to them. It means we might hold off on challenging the status quo even if something really doesn’t feel right to us. Sometimes we might make decisions and take actions with little reason than the fact that everyone else is doing it.

This can lead to all kinds of unwise and harmful scenarios for ourselves and others ranging from not standing up to bullying and bad behaviour to conforming to ways of living that are not true to our nature or deepest desires.

The Moral of the Story and a Lesson In Mindful Living

Part of the invitation of mindful living is to cultivate more self-trust and authenticity. In other words, mindfulness helps us get more in touch with ourselves and teaches us to trust our own authority and our own direct experience rather than always relying solely on the opinions, expectations and experiences of others. It helps us to act from our own integrity and authenticity even when it’s challenging to do so.

How to Embrace More Authenticity and Self-Trust In Your Life

In what ways might you need to challenge the status quo in your life? Are there ways you need to speak up or change things where something doesn’t feel quite right for you? And instead of trying to fit in or be liked, how can you show up more as your true self today?

Make a pact with yourself today to not be defined by other people’s expectations of you or the desire to fit in. Be brave, be authentic, speak out on the things that matter and most importantly, share the ‘real you’ with the world. 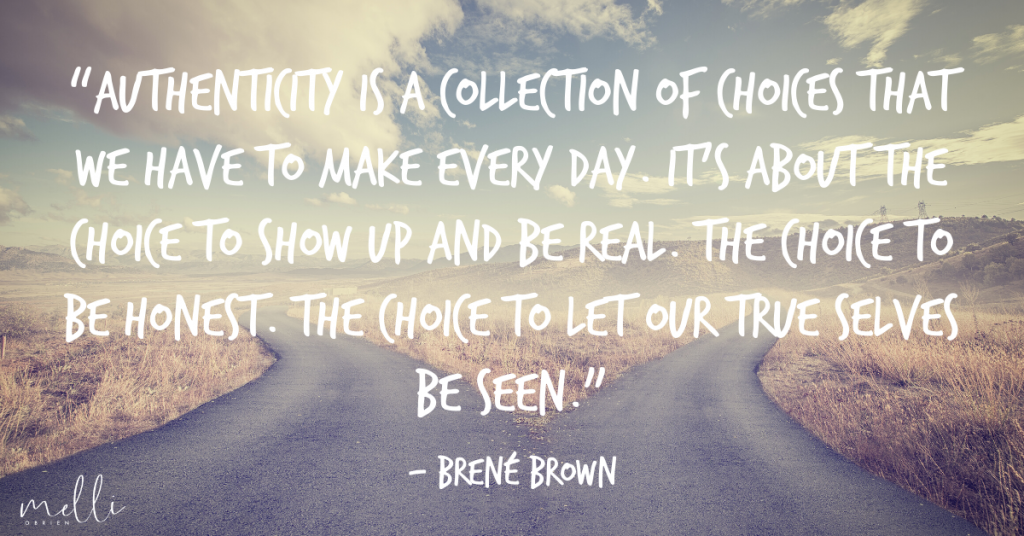 Thank You For Listening

I really appreciate you choosing to listen or read about mental strength with me. If you found benefit from today’s episode/post and you think others might benefit from hearing about it, go ahead and share it using the social media buttons below.

I would also be super grateful if you would consider taking a minute or two to leave an honest review and rating for the show on Apple Podcasts. They’re extremely helpful when it comes to reaching our audience and I read each and every one personally!

Finally, remember to subscribe to the podcast on Apple Podcasts to make sure that you never miss an episode.